Over the past month, PNC customers have taken to Twitter to complain about not being able to connect to peer-to-peer payments app Venmo, which is owned by PayPal.

Instead of guiding them through how to connect to that app, the Pittsburgh-based bank, in some cases, suggested switching to bank-backed alternative Zelle. The app is owned by major Wall Street banks and competes directly with Venmo. In response, Venmo suggested that affected users should tweet PNC to “let me use the financial service apps I need!”

The disagreement underlines what can be a divisive topic of who owns consumers’ financial data — the banks or the consumers — and the difficulty of exporting that data in the United States. The Wall Street Journal first reported the spat.

In the U.S., finance apps rely on third parties like Plaid to connect to bank accounts. The start-up, last valued at $2.7 billion, connects more than a quarter of U.S. bank accounts to everything from Venmo to the mobile investing apps Robinhood and Acorns to cryptocurrency exchanges Coinbase and Gemini. But banks still need to grant that permission.

PNC’s argument for not allowing access comes down to security. The bank said recent news coverage was a “missed opportunity to shed “additional light on the real issue at hand, rising concern across the financial services industry and among regulators regarding the potential vulnerability to consumers of cyber fraud when using financial apps, and particularly ones that utilize data aggregators.”

“PNC supports our customers’ use of such apps, balanced with our steadfast commitment to protecting them from fraud,” a PNC spokesperson said in a statement. “That commitment has never been more important as the financial services industry has seen an uptick in fraud that appears related to data aggregators and data aggregator supported apps.

PayPal declined to comment beyond the Venmo tweets. John Pitts, Head of Policy and Advocacy at Plaid, said people “should be able to connect their financial data with the apps they want.”

“Most banks agree and work with us to safely enable that, Pitts said. “We are ready to work with PNC and would like to be able to restore access quickly.” 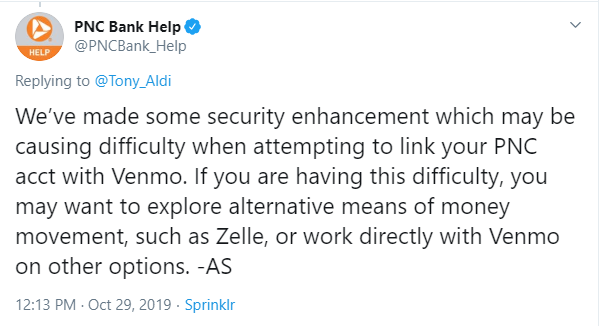 Without a third party, it’s extremely hard to link to a bank account in the U.S.. Without a quick way to verify account ownership, for example, the other solution is the much slower trial deposit method. That involves depositing 4 cents at a time in an account and waiting for a customer to confirm the deposit details.

The debate over access to financial data has already been hashed out in the European Union and the United Kingdom. So-called “open banking” laws now require banks to make it easier to export your data, and pick up and move to a new bank. Advocates say it gives non-banking start-ups the chance to compete with incumbents and gives consumers more choice over financial products and services.

Across the EU, the revised Payment Services Directive, or PSD2 requires banks to share customers’ data with each other through the same standard, known as an API. In the U.K., the Competition and Markets Authority, or CMA has mandated that the country’s biggest banks also adopt an open banking standard.

Karen Mills, a senior fellow at Harvard Business School and former head of the U.S. Small Business Administration during the Obama years, said the PNC-Venmo spat shows “how much we need to adopt opening banking” that “lets customers own their own data and permission it to be used by regulated third parties through standard protocols.”

“Open Banking will drive more innovation that is good for customers and the financial system— and provide a secure an regulated environment,” Mills told CNBC. “This direction is urgently needed.”

Dutch multinational bank ING was among those that were forced to adapt to the new laws. Benoit Legrand, chief innovation officer at ING and CEO of ING Ventures, told CNBC there has been a power shift from big institutions “which are no longer respected, for good or bad reasons,” to the hands of the consumers.

“Banks in Europe have generally been pushing back a lot because it’s making their markets more open, and it’s just disrupting the way they have been doing business,” he said. “We believe firmly in being on the side of the customer for the long run, and being transparent and fair — the money is the customers’, not ours.”

Eventually, Legrand said a move towards more open banking is a good move for consumers and the global economy in general by making it easier to “move money from left to right.”

“It puts pressure on the banks to increase the level of services,” he said. “Banks have been lacking a bit of humility by saying to customers ‘this is the offering, you don’t like it you can move to someone else’.”

A part of Dodd Frank actually mandates that U.S. banks do this, too. Section 1033 of the post-financial crisis law requires that banks make financial data — including information relating to any transaction, series of transactions, or to the account including costs, charges and usage data — in an electronic form. It’s also supposed to usable by consumers and in a standardized format.

While it clearly requires that banks can’t withhold information, they have argued that the law does not require them to “actively facilitate, or even allow, access through every method a consumer might desire,” Laurence Platt, a partner in Mayer Brown’s Washington D.C. office, said in a legal update on the subject.

Jason Brown, CEO of fintech start-up Tally, likened the problem switching telephone providers. Before 2000, in order for someone to switch from Verizon to AT&T, they had to switch their cell phone number, too. It provided just enough friction to keep people with their providers. It only changed when started to pay attention, and never got to the point where consumers were pushing for change. He anticipates a similar trajectory here.

“Companies make more money when it’s harder for consumers to switch from one provider to the next,” Brown said. “High switching costs are one of the key drivers of corporate profitability — so banks do not want to make it easy for you to take your data with you when you leave.”

He pointed out the differences between tech’s argument for using data versus banks. Google and Facebook monetize data for advertising purposes. Banks don’t. But Brown said the fact that it’s harder to move between banks makes it easier for them to charge more.

“Banks are keeping your data hostage to charge you more money,” said Brown. “You are directly paying more because of that — it’s an interesting kind of symmetry to tech but it’s very different.”

In the U.K., Open Banking could be expanded soon to allow for data sharing between a much larger range of finance companies, according to the Financial Conduct Authority (FCA). Open Banking allows bank customers to share their financial data with other people and companies. In turn, those companies may have recommendations to switch to a different financial […]

In November, Kuwaiti public-transport application My Route was sold to Oman-based smart-transportation company eMushrif for an undisclosed amount. Such cross-border acquisitions are generally rare in the Middle East’s nascent startup ecosystem. Except, that is, in Kuwait, which is trying to position itself as the perfect test market for companies that wish to try out digital […]

Sweden-based payment provider Klarna has announced its plans to open a tech hub for more than 500 employees in Berlin in 2020. The aim of the new hub is to further expand Klarna’s product portfolio and services and to better serve the growing number of new dealers and end customers in Europe and the US. At the […]