pen banking has grown to become a global phenomenon and while pioneers like the UK and the European Union (EU) have turned to regulatory action to support the industry’s transition into this new era of banking, legislators in Switzerland has reacted more cautiously so far.

The Swiss Bankers Association (SBA) has already rejected the proposal for an interpretation of PSD2, the EU’s second payment services directive, to be adapted to the Swiss market and have instead let the market decide how the topic should be tackled.

Trade group associations have shared their views on that matter. The Swiss Finance Startups (SFS) association has proposed setting up a wide-ranging association dedicated to developing a viable and flexible Swiss Open Banking solution through self-regulation, while Swiss Fintech Innovations (SFTI) has argued that self-regulation could not function without a legal basis.

Overall, all the main stakeholders seem to agree on the fact that open banking can only function and grow sustainably on the basis of common standards.

Over the past couple of years, numerous initiatives led by organizations including SIX Swiss Exchange, Swisscom and SFTI have emerged to develop standards designed to make it easier for banks and third-party providers to enter open banking.

These initiatives are developing standardized interface solutions through which banks, fintechs and other third-party providers can exchange customer and account data in a structured manner on behalf of the respective customer. 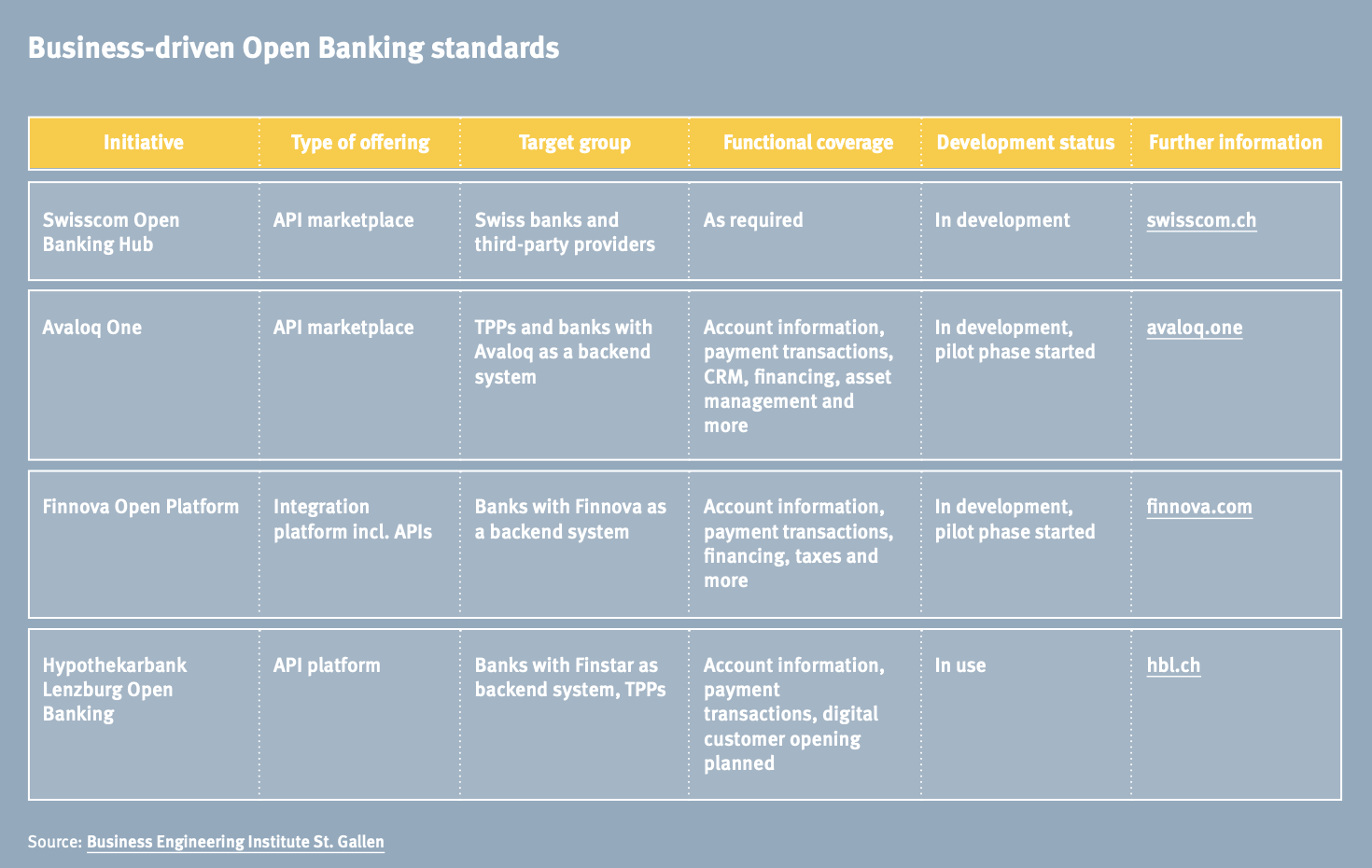 Independent initiatives include OpenBankingProject.ch, a project aimed at facilitating cooperation and offering open banking as a common basis for banks, fintechs, and integration providers. OpenBankingProject.ch is building a knowledge platform, operationalizing API standards relevant to Switzerland together with the community and publishing them on a developer portal including a sandbox for initial tests.

Founding partners of the initiative include the Business Engineering Institute St. Gallen, DXC Technology, Ergon, Finnova, Finstar (Hypothekarbank Lenzburg) and the University of Bern. Avaloq has also been a partner since September.

Another initiative is the SIX Connectivity Platform. The platform is designed as an open system that invites the participation of all financial institutions and third-party providers. Its purpose is to lay the foundation for the reliable, secure and efficient exchange of financial data.

Finally, the third independent initiative is led by SFTI. With its Common API working group, the association is working with key industry players to establish a widespread API standard.

The three former ones are API marketplaces targeted at Swiss banks and third-party providers, while the Finnova Open Platform is an integration platform featuring APIs targeted at banks that use Finnova as a backend system.

Despite the several voluntarily open banking initiatives by the Swiss financial services industry, Switzerland still lags behind the likes of the UK, the EU and Australia, the world’s leaders in open banking. In these three jurisdictions, regulators have provided the conditions to accelerate migration towards open banking through a series of reforms.

Closely behind are Japan, Hong Kong, South Korea, Bahrain, and Brazil, according to the Open Banking Report 2019 by the Paypers.

KEY POINTS When Goldman Sachs released a long-awaited app for customers of its Marcus consumer bank last week, it did so with little fanfare or hype. But the app will one day serve as the bank’s storefront and one-stop shop for an array of digital banking services, according to Adam Dell, a Goldman Sachs partner […]

THE MONETIZATION OF OPEN BANKING: How legacy institutions can use open banking to develop new revenue streams, reach more customers, and avoid losing out to neobanks and fintechs (Mekebeb Tesfaye, businessinsider.in)

Open banking has arrived, and it’s transforming the UK’s banking landscape – next up could be the world. Regulatory efforts in the UK are transforming retail banking, reshaping incumbents’ relationships with customers, and easing entry for fintechs. Regulators across every continent are responding with actions of their own. Underpinning open banking initiatives is the idea […]